It gives QEHS great pleasure to launch the first articles of the long awaited Alumni News.

This Live Newsletter will regularly update with all the Alumni News received by the school.  It will also link to other pages/sites of interest for Alumni to explore.

If you are an ex-member of the school community, it may interest you to register on the Future First portal https://futurefirst.org.uk/ to connect with QEHS and other alumni, or look up the Facebook page:Queen Elizabeth’s High School, Gainsborough: Alumni.

Alternatively, contact the school office for further information on how to support QEHS or email community@qehs.lins.sch.uk

On Thursday 9 January the Chair of Governors welcomed back last year's Year 13 students and guest speaker Alumni Dr Shambhu MD MSc(Dist.) MRCGO Diplomate Emeritus of the American Board of Internal Medicine, to present the awards.

This fantastic evening of celebration was very well attended by families and friends, as students returned from far and wide to receive their accolades. Current students were also in receipt of Year 11 and Year 12 awards for last year.

It is always with great fascination that we receive news of scholars gone by. The Archive Group delves with intrigue into new information that come to light, searching for previously unheard of details of life at the schools that thrived here in the past, and leading us to the present day QEHS.

When the Archive Group recently received a package, they found photos, a school cap and a letter from the granddaughter of Alumnus Edmund George Aldam (1906-1997). The cap is a rare 100 year old relic, to add to our collection of memorabilia, and hope to display on our return to normal school life. Inside it clearly bears Edmund's name, 'FORM V, GGS'. The school badge shows the viking longboat, but is very different to the QEHS badge we have today. I would hope to share the cap with the new Year 7 students as they research the origins of the school badge as part of their induction into the history of this fantastic school.

We hope that with this article, we will find further memorabilia - particularly from the girls' Gainsborough High School, as we celebrate it's 100th year; but with a much smaller archive at QEHS than that of the boys' Gainsborough Grammar School.

Edmund is pictured as a 16 year old boy near the centre of the photo, (middle photo) on the second row, behind the master wearing glasses.

This photograph of Edmund shows him at age 18, and later with his wife Viola, in a newspaper clipping about his life. After studying at Gainsborough Grammar School, Edmund worked locally for his father, before his varied career, led him to become a prominent figure in local government, still in the local area, until his retirement at the age of 78. Maybe some of you, or your families remember Edmund George Aldam (1906-1997).

Our thanks go to Mrs Angela Drane for sharing this information about her grandpa, wrote: "I know my grandpa would be delighted for the school to have these items".

Schoolmaster at Gainsborough Grammar School before the First World War,

who died of wounds in German captivity in 1916.

Earlier this year the QEHS archive team received a request for further information from a family member of Alfred Hallam Petty.

Alfred Hallam Petty was born in Hull in 1889 and gained a BSc in Maths and Physics at Sheffield University in 1912. He served as a Schoolmaster at Gainsborough Grammar School sometime between 1912 and 1915.

In September 1915 he was commissioned as a 2nd Lieutenant in the 5th Battalion of the Sherwood Foresters and joined his unit in France in May 1916. On 1 July 1916, the first day of the Battle of the Somme, he was severely wounded and captured by the Germans. He was taken to the German Military Hospital at St Quentin but sadly died of his wounds on 17 July 1916.

Alfred Hallam Petty is mentioned on our Roll of Honour, also on the new (2017) memorial plaque to the Old Boys who died in the two World Wars. 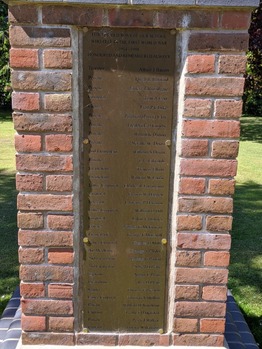 In response to the request, I was able to find his entry in our archive staff register, from his time here as a Mathematics Master. His appointment started on 17 September 1913, lasting until July 1915. He was paid the princely sum of £150 per annum!

Mr Riches, the family member of Alfred Hallam Petty was extremely grateful for all of the information provided (see the list below). He has used to complete a family history, which includes the story of 2nd Lieutenant Alfred Hallam Petty.

As two of our Year 13 members now leave the archive team, we hope to find more archive investigators to join us when we return to school. Please contact me or Mrs McGrath if you are interested.

During the writing of this article we were sad to learn that Peter Bradshaw, well known Gainsborough Historian and supporter of the Heritage Centre, had passed away recently.

Staff are always delighted to hear news of the successes of past students. Here is the amazing story of Alumni Sandie Webster, as she goes from strength to strength. Sandie is an inspiration to us all, especially her own children (at QEHS) as well as the newly formed Female Lead Society, who she hopes to meet later in the year.

Sandie first hit the headlines in October 2013, when she won the National Dulux “Pitch 2 Win Business Award” for decorating. On reaching the final 5 she delivered a 20-minute Dragons Den style winning pitch to the judges.

A month later she was the first ever female winner within the construction awards, at the final of the “National CITB Skillbuild Decorating Competition”, as well as becoming the Lincoln College “Student of the Year”.

Sandie recently featured in the Painting and Decorating News:

To celebrate International Women’s Day, a painter and decorator from Lincolnshire has shared the secrets of her success in the latest podcast from a national trade body. “I have recently done a podcast about my life, also working with them and CITB on promoting women in the trade etc.”

Sandie’s most recent accolade came earlier in 2020, as the runner up of the “Women in Construction Award” in Design and Build Magazine. As she expands her business, having enlisted her first female apprentice due to start in September, I’m sure you would join QEHS in wishing Sandie every future success. Thank you for sharing your inspiring story and accepting our invitation to attend the QEHS Junior Presentation Evening 2020. 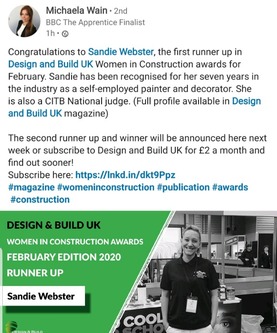 "Many thanks for this, it is so nice to be recognised at Queen Elizabeth's as I have so many fond memories", commented Sandie.

To connect with Sandie:

Congratulations to Alumnus Richard Bilton (pictured centre), who was selected to play for England in the World Croquet Team Championships in New Zealand, during January 2020.

Alumni Dylan Simms left QEHS in 2017 to follow his chosen career path. It is fantastic to hear of his success at @JohnLeggottColl and beyond. Congratulations on your achievements so far Dylan and good luck for the future! Keep in touch https://futurefirst.org.uk

Law Undergraduate Charlotte Burgess has received a scholar’s gown and scholarship prize money to go with a trio of awards at the end of the first year of her Law course at Durham University. 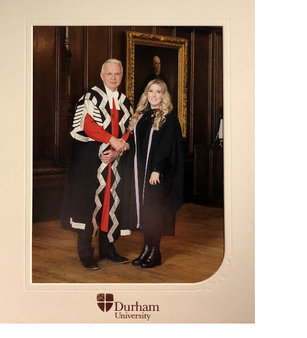 Charlotte told us: “I achieved the Best Overall Performance Prize supported by Herbert Smith Freehills in my first year, for coming first in the year-end exams. In addition I was awarded the UK Constitutional Law Prize for having the highest score in the UK Constitutional Law Module, as well as receiving the Vice-Chancellors Scholarship for academic excellence for 2018/19 - only one of which is awarded per subject, per year."

Charlotte, her family and QEHS are extremely proud of her achievement since leaving QEHS in 2018.  Congratulations Charlotte!